How Low Will Bitcoin Go? BTC Appears to Stabilize Around $37K


After a veritable bloodbath last week, it appears that the price of Bitcoin may be stabilizing–maybe.

Indeed, BTC’s price over the last seven days is still down on the order of 15 percent. However, the 24-hour charts show something a bit more optimistic: Bitcoin is up more than 5 percent, having steadily climbed from $36.3K yesterday to roughly $38.5K at press time.

Looking Forward to Meeting You at iFX EXPO Dubai May 2021 – Making It Happen!

It’s almost enough to make one think that rays of hopeful light could be penetrating the doom and gloom that plagued crypto markets last week. But is this reprieve from dropping crypto prices really the end of the nightmare? Or is this just the beginning of a long, dark night?

What caused Bitcoin to drop?

The causes behind Bitcoin’s massive drop seem to be fairly clear. The big news that broke last week was a joint note issued by the China Internet Finance Association, China Banking Association and China Payment and Clearing Association. The note made clear that China is planning on cracking down on cryptocurrency. 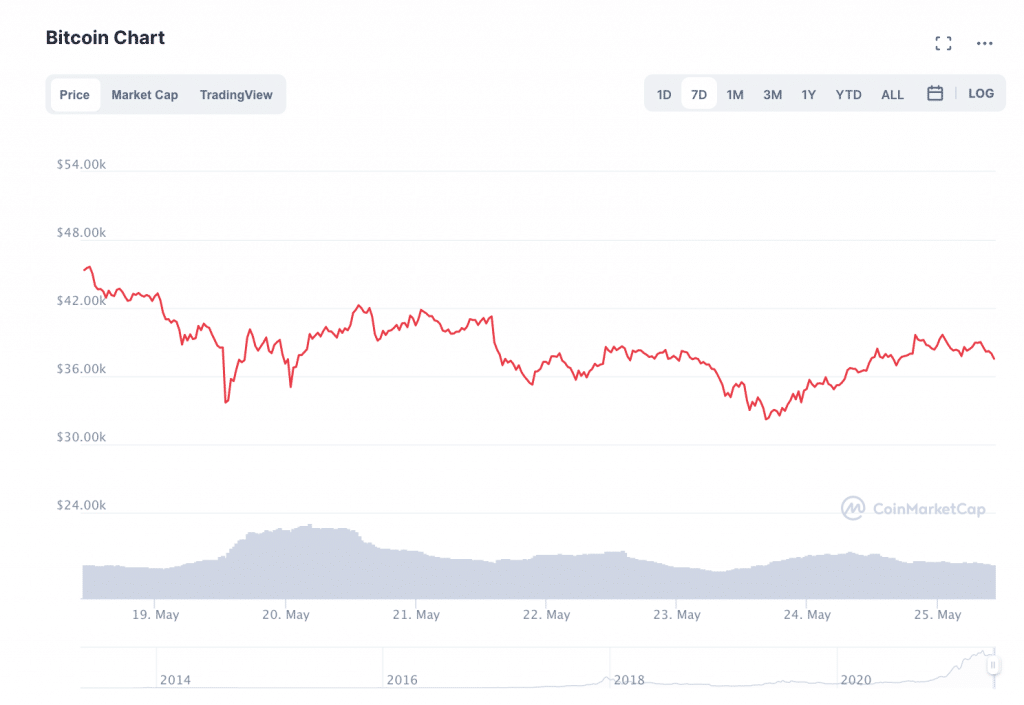 The note also stated that “Virtual currency’s prices have soared and plummeted recently, resulting [in] a rebound of speculative trading activities of virtual currency,” the note said. “It has seriously damaged the safety of the people’s investment and damaged the normal economic and financial orders.”

Additionally, while China was expressing its intentions to clamp down on crypto, Bitcoin was also suffering another blow from a rather unexpected source. Tesla founder Elon Musk abruptly announced that his company would no longer be accepting BTC payments, citing environmental concerns. While Musk clearly stated that “Tesla will not be selling” any of the BTC on its balance sheet, the move appeared to have negative effects on the price of BTC.

Analysts have also pointed out that the negative effects of both pieces of news were magnified by the liquidations of a high number of over-leveraged positions. The Twitter account of stock screening platform StockstoTrade pointed out “This Wednesday when #Bitcoin and #cryptocurrency crashed, 775,000 over-leveraged accounts were liquidated (completely wiped out) resulting in $8,000,000,000+ in total losses.”

This Wednesday, when #Bitcoin and #cryptocurrency crashed, 775,000 over-leveraged accounts were liquidated (completely wiped out) resulting in $8,000,000,000+ in total losses. Let this be a lesson to NEVER oversize and ALWAYS take gains into strength. Anything is possible.

Is BTC’s latest round of FUD old news?

Together, these three factors contributed to a sort of “perfect storm” of bad news for Bitcoin. However, while the long-term effects of each of these pieces of news may not yet be fully realized, the short-term crash may have come to an end.

Samson Mow, CSO of Blockstream and CEO of Pixelmatic, told Finance Magnates that “We’ve already reached the bottom, and I would say Bitcoin has stabilized.”

“There has been a series of recycled FUD (fear, uncertainty, and doubt) about Bitcoin which has scared new investors, but most have already sold in a panic,” he explained. “At this point, seasoned investors and HODLers have been steadily buying the dip — it just takes time for dollars to reach exchange accounts and for the buy pressure to overcome the panic selling.”

The term “recycled FUD” refers to the fact that the problems that Bitcoin is currently facing seem to be reiterations of problems that it has faced before. After all, this isn’t the first time that the Chinese government has come out against crypto: in 2017, Bitcoin saw a serious price drop when China banned domestic cryptocurrency exchanges and ICOs.

How Will The Banks of The Future Look?Go to article >>

“Media narratives have had a stronger impact on the Bitcoin price than vice versa.”

As for Tesla’s decision to drop BTC payments because of environmental concerns, many analysts agree that Bitcoin’s environmental problems are a moot point. Yes, BTC does have a heavy carbon footprint–but so does the traditional financial system, they say; others argue that the majority of electricity used to mine Bitcoin is generated from renewable sources.

In any case, the bottom line is that these issues are not new–they have been present in BTC markets for years, and discussions about their impacts have been ongoing. However, with so many new investors in the Bitcoin market this year, these pieces of news–which have appeared in various forms in the past–may fall on fresh ears.

As a result, “Media narratives have had a stronger impact on the Bitcoin price than vice versa,” Samson Mow said.

Additionally, “Many reputable outlets have been picking up poorly researched reports and multiplied their impact through sensational headlines,” he argued. “Paired with the ‘Elon Musk Effect,’ this sent the market tumbling and led to cascading futures liquidations, which in turn stirred up panic among many investors.”

“But just like the impact from Elon’s Tweets is noticeably wearing off, the current narratives will become old news soon, and their effect on the price will be negligible — until the next cycle, that is.”

How low will Bitcoin go?

For now, however, the “Elon Musk effect” on Bitcoin’s price is palpable. Paul Sundin, who is the founder, CPA, and tax strategist of Emparion, told Finance Magnates that “When a prominent Bitcoin influencer like Elon Musk publicly announced that Tesla would no longer accept Bitcoin currency for purchasing their vehicles, it’s like announcing to the public that you have withdrawn your confidence and trust as an investor.”

Thus, “panic selling ensues” from “newbie and dependent investors who only mirror their investment strategy from the likes of Elon Musk.”

But how low could this Musk effect drive the price of Bitcoin? “While I cannot specify when it stabilizes, the decline will only be for the short term,” Sundin told Finance Magnates.

“It will most likely go back to its 200-day moving average…to $40,000 compared to just below $44,000 currently,” he said. “The decline, in my opinion, is a way for this highly volatile market to make corrections, and the market will most likely rebound even before the prices can get any lower.”

“Bitcoin trades largely on sentiment, which can lead to almost any outcome, but the psychological benchmarks of previous stable levels or round numbers are often telling,” he said. To that end, “$30k seems to have been a natural support level with the price rallying back toward $40k from the low $30k’s this past week.”

“If the news does not contain further surprises (and Elon keeps his comments in check), we likely won’t see further drops in the near term. There have been net positive institutional buyers who have seen this as a buying opportunity and that helps support the price.”

(So far, Elon seems to be behaving. On Monday, he tweeted that he “Spoke with North American Bitcoin miners. They committed to publish current & planned renewable usage & to ask miners WW to do so. Potentially promising (sic).”)

Even with the price drama of the last two weeks, Samson Mow believes that “$100,000 is still in play this year.”

“None of the current events have had any impact on Bitcoin’s fundamentals — in fact, none of the ‘concerns’ are actually new,” he said. “Bitcoin is still the best form of money we have ever seen, and it still serves as a powerful hedge in times of uncontrolled monetary stimulus.”

Additionally, “If you look at the demand for Bitcoin, it’s unchanged. Companies are still adding Bitcoin to their balance sheets, coins are still being moved off exchanges into cold storage at increasing rates, and famous athletes are still demanding to be paid in Bitcoin. And remember that we have another halving event in three years.”

Still, while the most recent round of price drama may have come to some kind of a conclusion, this probably won’t be the last time that BTC sees high levels of volatility.

“Bitcoin’s price will likely remain volatile until we exceed the market capitalization of gold – that would be around $500,000 per Bitcoin,” Mow told Finance Magnates. “We’re already seeing volatility reducing now though, which is a good sign. Also, there are likely going to be new Bitcoin-focused financial products coming to market that will reduce volatility and gyrations.”