After several days of heading toward market stabilization, cryptocurrency prices are back in the red.

The negative movement appears to have affected altcoins the most. At press time, all of the altcoins in CoinMarketCap’s list of largest cryptocurrencies by market capitalization were down roughly percent. ETH was down nearly 11 percent, while Binance Coin (BNB) and Cardano (ADA) were both down by roughly 12 percent. Dogecoin (DOGE) was down roughly 9 percent; XRP was down 13 percent, and PolkatDot (DOT) and Internet Computer (ICP) were both down around 9.5 percent.

Looking Forward to Meeting You at iFX EXPO Dubai May 2021 – Making It Happen!

Bitcoin’s (BTC) loss was slightly less severe, with BTC down 8 percent in the last 24 hours. While the drop pales in comparison to the price cuts we saw in Bitcoin markets last week, it has shaved off quite a bit of the progress that Bitcoin has made toward its recovery over the past week.

As the week comes to a close, BTC’s next moves could determine much about its future. Earlier this week, crypto market analyst, TraderKoz said that if BTC can hold the $37,000 support line over the weekend, its chances of regaining the $42,000 resistance level will grow. However, this latest drop has brought BTC to roughly $36K, and the 24-hour trend does not look too optimistic.

This most recent price drop in BTC markets seems to indicate that Bitcoin could be entering a bear market. While many crypto analysts are bullish on Bitcoin’s long-term trajectory, this drop could be an indication that Bitcoin has some more correcting to do before it can build enough meaningful support for another rally. 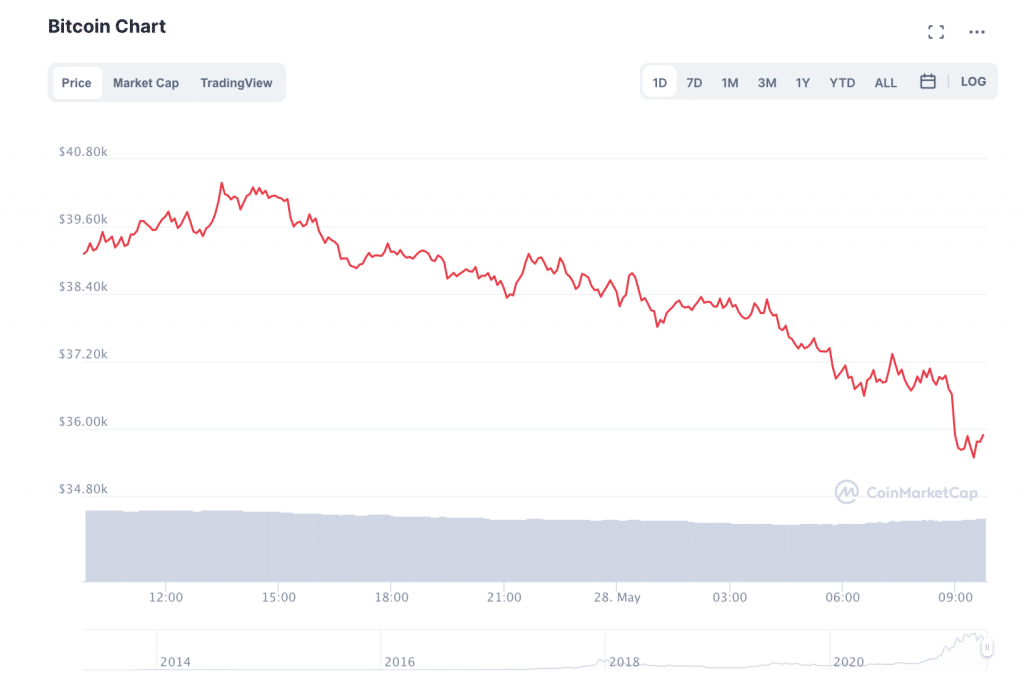 Is Margin Trading the Real Reason for Bitcoin’s Market Volatility?

While the main narrative around why crypto markets have been dropping over the past weeks has centered around negative news from the Chinese government as well as the announcement that Tesla would no longer be accepting Bitcoin payments. However, there is a third factor that is not quite as visible.

Indeed, Elon Musk and the Chinese government certainly have some effect on the price of Bitcoin. However, many analysts believe that the real driver behind last week’s crash was leverage.

CNBC reported that: “traders taking excessive risk in unregulated cryptocurrency markets” were forced to sell when prices started to drop. Therefore, what may have been a minor correction in the price of Bitcoin spiralled into a price drop of roughly 30 percent.

How does leverage trading, or ’margin trading’, work? Essentially, traders borrow cash from an exchange or brokerage firm that allows them to take a larger position in Bitcoin than their holdings would ordinarily allow. If BTC prices suddenly drop, traders have to pay the brokerage back. This is called a ’margin call’. Before traders reach that point, there are sometimes a set of sell triggers in place to make sure that traders can repay their debt.

You mean not having circuit breakers & allowing people with 50X long leverage to blow-up is a good thing?

Yes! Welcome to #Bitcoin where we actually applaud these things.

Not only do these exchanges allow for extremely high levels of risk, the automatic selloff triggers that are present in some brokerages set off a sort of ’domino effect’ that leads to massive liquidations.

Brian Kelly explained to CNBC that this ’crowd factor’ can make market movements even more powerful. “Everybody’s liquidation price tends to be somewhat near everyone else’s, when you hit that, all of these automatic sell orders come in, and the price just cascades down,” he said.

Devin Ryan, an analyst at JMP, explained to CNBC that in this way, “Selling begets more selling until you come to an equilibrium on leverage in the system”: the sales ’compound’ as leveraged positions are liquidated; as the price falls, fewer and fewer traders are able to meet margin requirements.

“Leverage in the crypto markets — particularly on the retail side — has been a big theme that accentuates the volatility,” Ryan added.

For example, last week’s drops in the price of BTC eventually led to the liquidation of $12 billion worth of 800,000 leveraged Bitcoin positions.

The multiplying effects of leverage on price movements in BTC markets were also felt in the price of ETH, which dropped relatively further than Bitcoin did last week.

American entrepreneur-turned-crypto enthusiast, Mark Cuban weighed in on the effects leveraged ETH trading on Twitter: “De-Levered Markets get crushed,” he said. “Doesn’t matter what the asset is. Stocks. Crypto. Debt. Houses. They bring forced liquidations and lower prices. But, crypto has the same problem that HFTs (high-frequency traders) bring to stocks, front-running is legal, as gas fees introduce latency that can be gamed.”

“That makes drops drop faster, and gains go up faster,” he said.

That makes drops drop faster, and gains go up faster. I’m not the expert but at some point there should be an EIP that changes to single speed and gas set and paid in DAI. Take the front running and gas fee inflation out of the equation

Some analysts have pointed out that the influence of leveraged positions on crypto markets could have effects beyond price volatility. For example, Jake Chervinsky, the General Counsel at Compound Finance, wrote on Twitter that: “The speed & severity of this crash gives the SEC an easy excuse to deny this year’s Bitcoin ETF proposals.”

“Price action appears driven by derivatives trading on unregulated offshore exchanges, the SEC’s big concern all along,” he said. “I wouldn’t rule an ETF out yet, but chances are low.”

Caitlin Long, the Founder and Chief Executive of AvantiBT, agreed: “The derivatives-driven volatility not only gives the SEC an excuse…but it increases cost of capital for the ecosystem and delays its mainstreaming,” she said, adding that there is “probably no way to stop the crazy leverage.”

Yep @jchervinsky—a group of institutional/#bitcoin investors had this very convo yest. The derivatives-driven volatility not only gives SEC an excuse as u say, but it increases cost of capital for the ecosystem &delays its mainstreaming. Prob no way to stop the crazy leverage tho https://t.co/6Qe7oErGCO

In addition to margin trading, some analysts believe that the crypto lending industry may have played a role in the market crash of last week.

CNBC reported that crypto companies like BlockFi and Celsius, which offer interest-bearing crypto accounts, lend bitcoin out to hedge funds and other professional traders. However, they also allow lenders to use their bitcoin holdings as collateral for cash loans, which they may then use to buy even more Bitcoin.

However, this can lead to problems. CNBC explained that: “for example, if someone took out a $1 million loan backed by bitcoin and the price drops by 30%, they may owe 30% more to the lender.”

In order to protect themselves, some of these lenders have automatic sell triggers on their lenders’ collateral. Brian Kelly told CNBC that: “[When] you hit a certain collateral level, [lending] firms will automatically sell your bitcoin and send the collateral to the lender.”

“This adds to the massive cascade effect — there was so much volume that most of the exchanges broke.”

What do you think of the effect of leveraged trading and crypto lending on the price movements in Bitcoin this and last week? Let us know in the comments below.