Bitcoin lost 30% of its value in one day! Plummeted to less than $ 32,000 after ban announcement in China

The total capitalization of cryptocurrencies fell close to 35% in a single day, with Bitcoin being the most affected, losing around 30% of its value in 24 hours.

This book gives you the essential guide for easy-to-follow tips and strategies to create more financial success.

Opinions expressed by Entrepreneur contributors are their own.

The world of cryptocurrencies is in the middle of a hurricane. Yesterday, it was reported that the Chinese government prohibited the country’s financial institutions from providing services related to digital currencies . Following the announcement, the total capitalization of cryptocurrencies fell close to 35% and Bitcoin lost around 30% of its value , in a single day!

Just in mid-April, Bitcoin (BTC) reached an all-time high of over $ 64,000 , according to data from CoinMarketCap . During the following weeks, he entered a downward streak, which was enhanced on May 16 at night, when Elon Musk announced that Tesla would no longer accept payments with said cryptocurrency .

However, the great thrust was given by the Chinese government on May 18. Yesterday, Bitcoin was trading at about $ 45,500 , but after the ban was announced on Wednesday, May 19, it fell to $ 31,663, according to CoinMarketCap. This means an approximate 30% reduction in its value in the last 24 hours and a total fall of 50.5% in the last month . 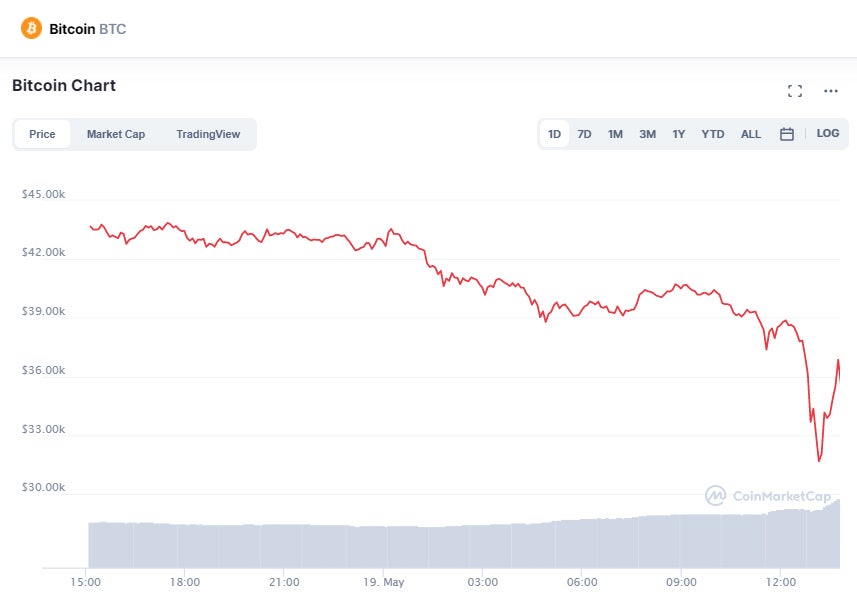 Not only Bitcoin was affected

In the last 24 hours, several cryptocurrencies have suffered the effects of the Chinese ban. The same specialized portal recorded losses in the total capitalization of cryptocurrencies of more than 721,453 million dollars , which translates into a 35% drop in the entire market .

Total cryptocurrency market capitalization from May 18 to 19, 2021. Image via CoinmarketCap.

Right now, 45 of the 50 most popular cryptocurrencies are in the red with a downtrend . However, both Bitcoin and Ethereum are beginning to show signs of recovery, although they are not strong enough to claim victory.

Joe DiPasquale, CEO and founder of the BitBull investment fund, commented that this is normal volatility for Bitcoin. The businessman pointed out that the cryptocurrency is experiencing “a period of natural consolidation that we consider necessary for the support lines to be formed for a future appreciation,” he told the CoinDesk portal.