Bitcoin Is Back! Can Elon Musk Drive BTC to $50K?


The price of Bitcoin has climbed back above $40K for the first time in roughly three weeks.

The passage over $40K may not have been exactly unexpected. However, after questions arose about whether or not the price of BTC would need to fall below $30K before a meaningful recovery was possible, the rise above $40K is certainly a sign that things are looking up. Some analysts are even eyeing $50K. 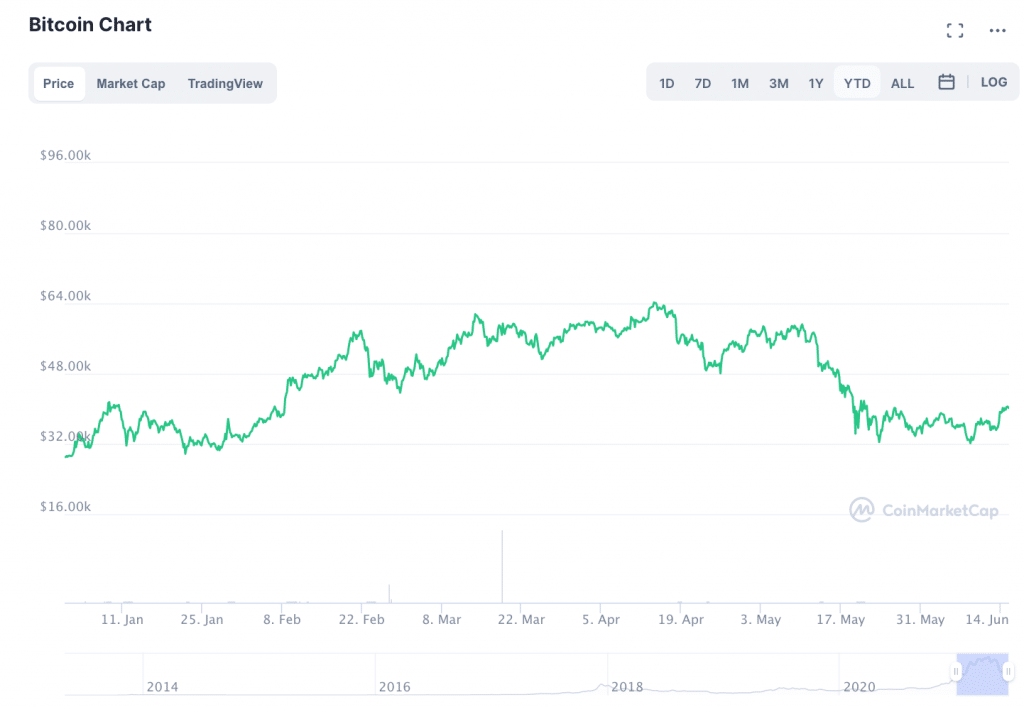 One of the most significant pieces of news was, yet again, brought about by Elon Musk. Last month, Musk’s announcement that Tesla would no longer be accepting Bitcoin payments sent shockwaves through the market. Some analysts believe that the announcement contributed to market movements that triggered more than $12 billion in liquidations of leveraged positions.

However, on Sunday, Elon took a step back toward Bitcoin.

True to style, the announcement came in a tweet: “When there’s confirmation of reasonable (~50%) clean energy usage by miners with a positive future trend, Tesla will resume allowing Bitcoin transactions,” Musk wrote.

This is inaccurate. Tesla only sold ~10% of holdings to confirm BTC could be liquidated easily without moving market.

Musk was responding to a CoinTelegraph tweet linking to an article in which Magda Wierzycka, the Chief Executive of Sygnia, accused Musk of Bitcoin market manipulation. “What we have seen with Bitcoin is price manipulation by one very powerful and influential individual,” Wierzycka said in an interview with Bruce Whitfield at the Money Show this week, per CoinTelegraph’s report.

Musk responded by saying that: “this is inaccurate. Tesla only sold ~10% of holdings to confirm BTC could be liquidated easily without moving market,” and then going on to say that Tesla will begin accepting payments when the Bitcoin mining industry is confirmed at 50% clean energy.

“Elon Musk’s Irresponsible Tweets Have Caused More People to Get Liquidated than Any Other Crypto Event in History.”

The markets certainly seem to have responded to Musk’s announcement that Tesla has a theoretical path toward accepting Bitcoin payments in the future. On Sunday, before the tweet went out, the price of Bitcoin was hovering below $35K. After the tweet was posted, Bitcoin’s price shot to nearly $37K and has continued building momentum ever since.

However, not every member of the cryptocurrency community seems to be thrilled that Elon Musk is back. After announcing that Tesla would quit accepting Bitcoin last month, Musk drew ire from across the crypto industry.

For example, on June 5th, Ran Neuner, the creator and host of CNBC’s crypto trader, tweeted that: “Elon Musk’s irresponsible tweets have caused more people to get liquidated than any other Crypto event in history. Over 1 MILLION people have been liquidated, some losing their entire savings. These are the stats.”

Elon Musk’s irresponsible tweets have caused more people to get liquidated than any other Crypto event in history. Over 1 MILLION people have been liquidated, some losing their entire savings. These are the stats.

Even hacking group, Anonymous took aim at Elon, accusing him of ‘playing dumb’ with regards to Bitcoin’s carbon footprint. Why? So that Tesla could continue earning energy subsidy payments from the US government.

What Are the Benefits of a Technology Driven Liquidity Provider?Go to article >>

“The energy use argument about proof-of-work mining is a very nuanced conversation that requires a fairly complex understanding of how power grids work and how excess energy is wasted by power companies and sought out by crypto miners,” an anonymous representative said in a video that was posted last week.

“This is a conversation that you have been having for over a year and were intimately aware of,” the rep said, going on to imply that Musk’s ‘divorce’ from crypto may have had hidden motives: ultimately, to “…centralize the industry and take it under your control.”

Now that Musk and Tesla appear to be taking a step back toward crypto, some crypto market participants appear to be skeptical.

For example, Blockstream CTO and Pixelmatic CEO, Samson Mow wrote in reply to Musk’s tweet about returning to BTC payments that: “So if we setup mining farms close to all Tesla Supercharging stations, we should be fine right? (sic)”

So if we setup mining farms close to all Tesla Supercharging stations, we should be fine right?

In other words, there is some belief that Musk could be trying to position Tesla’s clean energy production as a possible source of energy needed for Bitcoin mining. However, there does not appear to be any hard evidence that this is the case.

“Bitcoin Is Resurgent Today as Markets React Positively to the Words of a Celebrity Seeking to Associate Himself with the Space.”

Ultimately, some analysts believe that Musk’s latest crypto-related comments are nothing more than an attention-grab.

In a statement shared with Finance Magnates, Bitfinex CTO, Paolo Ardoino said that: “Bitcoin is resurgent today as markets react positively to the words of a celebrity seeking to associate himself with the space,” Ardoino wrote. “The king of crypto is carrying cryptocurrency markets higher amid hopes that bitcoin miners will move towards a higher usage of renewables as their primary energy source.”

However, Ardoino, and many others, ultimately believe that Musk’s antics are a distraction from more meaningful growth happening in the Bitcoin and cryptocurrency sphere at large. “Meanwhile, bitcoin’s utility and use cases such as the Lightning Network continue to strengthen and grow,” Ardoino wrote. “While it is important to always take a long-term view with this incredible technology, we’re seeing a quiet optimism return to the market.”

Still, it is undeniable that Musk’s involvement in crypto will continue to have some effect on the crypto space for the foreseeable future.

Paul Haber, the CEO of Graph Blockchain Inc., said in a statement shared with Finance Magnates that: “The environmental implications of Tesla’s reacceptance of Bitcoin will most likely be insignificant because they aren’t likely to perform many transactions.”

However, Haber believes that Musk’s greatest influence on Bitcoin has to do with the narrative: “By far the biggest impact it will have is Elon educating the new users they introduce to the network about Bitcoin’s electricity use and his push for sustainability in the Bitcoin network.”

And, regardless of whether Tesla provides the energy or not, Bitcoin is facing a serious reckoning about its carbon footprint. The New York Times is among a myriad of news sources that have published countless articles highlighting Bitcoin’s environmental impact, particularly as its price rose throughout the course of 2021.

While Bitcoin advocates argue, as Anonymous did, that the conversation about exactly how much energy Bitcoin uses is ‘nuanced’, the fact remains that, at best, there is quite a bit of ambiguity surrounding the amount of carbon that Bitcoin releases into the atmosphere.

Industry leaders have taken up the issue with the creation of the Bitcoin Mining Council, which Musk is definitively not a part of. According to Business Insider, the current participants include business intelligence provider, MicroStrategy, investment management firm, Galaxy Digital, blockchain mining company, Argo, technology firm, Hive and mining company, Riot.

El Salvador, Taproot May Also Be Boosting the Price of BTC

Beyond Elon Musk and renewable energy, Bitcoin’s price may also be enjoying a boost from several other pieces of positive news that have hit the airwaves this week.

Earlier this month, the Central American country of El Salvador became the first nation ever to accept bitcoin as legal tender. According to The Guardian, the decision came “as part of its technology-loving president’s proposals to use the cryptocurrency to promote ‘financial inclusion’, investment and economic development.”

Additionally, the Australian Financial Review reported today that Bitcoin’s price could be riding high off of the Taproot upgrade, “which was approved by the majority of bitcoin developers at the weekend.” Taproot was designed to improve privacy, efficiency and “most importantly, unlock the ability for smart contracts to take place on the bitcoin blockchain.” The upgrade is set to be completed by November.

Traders lend out cryptocurrencies in quest for huge returns

Fighting For Freedom With Zuby

What contributed to this altcoin ‘outperforming’ Cardano, Dogecoin, and Binance Coin

This website uses cookies to improve your experience while you navigate through the website. Out of these, the cookies that are categorized as necessary are stored on your browser as they are essential for the working of basic functionalities of the website. We also use third-party cookies that help us analyze and understand how you use this website. These cookies will be stored in your browser only with your consent. You also have the option to opt-out of these cookies. But opting out of some of these cookies may affect your browsing experience.
Necessary Always Enabled

Performance cookies are used to understand and analyze the key performance indexes of the website which helps in delivering a better user experience for the visitors.

Analytical cookies are used to understand how visitors interact with the website. These cookies help provide information on metrics the number of visitors, bounce rate, traffic source, etc.

Advertisement cookies are used to provide visitors with relevant ads and marketing campaigns. These cookies track visitors across websites and collect information to provide customized ads.

Other uncategorized cookies are those that are being analyzed and have not been classified into a category as yet.